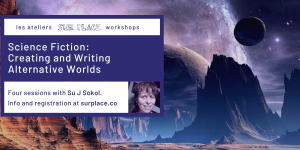 This workshop is for anyone who’s interested in writing science fiction or adding wonder to the stories they’re already writing.

During the sessions, participants will learn about science fiction and its sub-genres and be guided through the process of developing interesting and realistic characters, world-building, and plotting. Finally, participants will create their own short works of fiction which will be workshopped during the class.

Session One: Introduction to science fiction and its sub-genres (e.g. cyberpunk, space opera, utopia/dystopia, first-contact stories, hopepunk, post-apocalyptic tales, slipstream.) Examples of such works will be identified and discussed. Participants will have the opportunity to identify a type of science fiction story that interests them and explore a subject for a story of their own.

Session Two: Study and practice different aspects of the craft including character development and voice, realistic and effective dialogue, world-building without info-dumping, story arc, and SF themes and tropes. We will also discuss point-of-view, tense, and tone.

Two-week break during which participants work on a piece of short science fiction.

Session Three: Give and receive feedback on your own original short works of science fiction.

Session Four: Workshop the remaining short science fiction stories. Participants will be given individualized feedback and suggestions for moving forward to perfect and publish their work.

Su J. Sokol is a writer of speculative and interstitial fiction. She is the author of two novels, Cycling to Asylum, which was long-listed for the Sunburst Award for Excellence in Canadian Literature of the Fantastic and optioned for a film, and Run J Run, published in 2019 by Renaissance Press. A YA speculative fiction novel, Zee, is to be published in French by Bouton d’or Acadie. Her short fiction has appeared in a number of magazines and anthologies such as The Future Fire; Spark: A Creative Anthology; Glittership: An LGBTQ Science Fiction and Fantasy Podcast; and After the Orange: Ruin and Recovery. Su is a member of the Québec Writers’ Federation and SFCanada—Canada’s National Association of Science Fiction Professionals. She also curates and participates in readings and literary events in Canada and abroad.